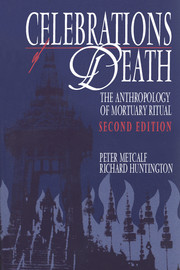 Celebrations of Death
The Anthropology of Mortuary Ritual