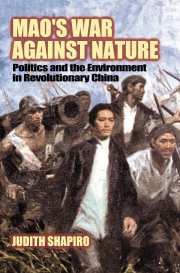 Mao's War against Nature
Politics and the Environment in Revolutionary China