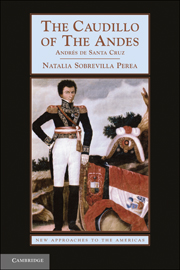 The Caudillo of the Andes
Andrés de Santa Cruz