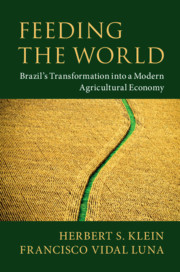 Feeding the World
Brazil's Transformation into a Modern Agricultural Economy