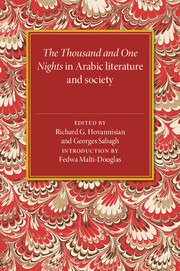 The Thousand and One Nights in Arabic Literature and Society