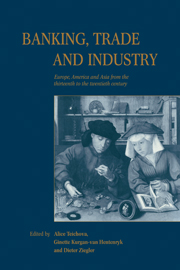 Banking, Trade and Industry
Europe, America and Asia from the Thirteenth to the Twentieth Century