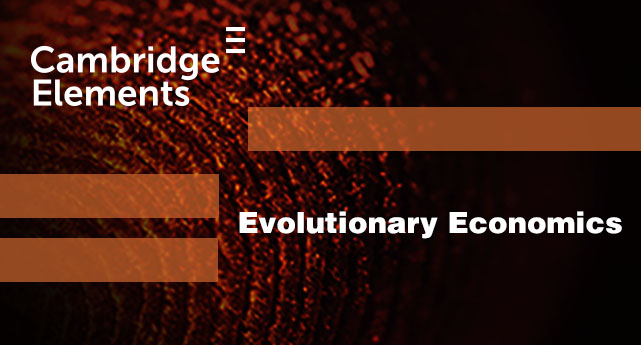 Evolutionary Economics is based on the idea that economic phenomena and the behavior of economic agents are best understood from the perspective of evolutionary science. Evolutionary economics is broadly concerned with questions of dynamics and change, with a particular focus on processes of entrepreneurship and innovation, industrial and institutional dynamics, and on patterns of economic growth and development.

Elements within the series are fast tracked after formal acceptance, updatable, accompanied by the latest functionality by being hosted on Cambridge’s new institutional platform (Core), as well as being available via low-priced POD. They will appeal to researchers and graduate students wanting scholarly overviews of theoretical and analytical building blocks of evolutionary economics, and also to stay abreast of current methodology or learn new tools. Cambridge Elements for Evolutionary Economics are intended to be able to be pieced together to provide comprehensive course texts.

This element will provide comprehensive overviews of the major building blocks of evolutionary economics across micro, meso and macro domains of analysis.

John Foster is Emeritus Professor of Economics the University of Queensland, Brisbane. He is Fellow of the Academy of Social Science in Australia; Life member of Clare Hall College, Cambridge; and Past President of the International J.A. Schumpeter Society. He is also Director of the Energy Economics and Management Group at UQ and Focal Leader for Renewable Energy at the Global Change Institute. His current research interests include the diffusion of innovations with special reference to the emergence of low carbon emission power generation technologies; modelling evolutionary economic growth with special reference to the role of energy; modelling the impact of climate change on the economy with a specific focus on the power generation sector; modelling the macro-economy as a complex adaptive system; applying self-organization theory to statistical and economic modelling in the presence of structural change; the re-design of national power grids to accommodate renewable energy generation. He currently serves on the following editorial boards: Journal of Evolutionary Economics, Review of Political Economy, Journal of Bio-economics, Journal of Institutional Economics and, previously, the Scottish Journal of Political Economy and Economic Analysis and Policy.

About the Editors- Jason Potts

Jason Potts is Professor of Economics at RMIT University, Melbourne. He is also an Adjunct Fellow at the Institute of Public Affairs. His research interests include economic evolution, technological change, institutional economics, economics of innovation, economics of cities, and the economics of cultural and creative industries. His current research focuses on innovation in the commons, and on global innovation policy. He was the winner of the 2000 International Joseph A. Schumpeter Prize and has published over 60 articles and six books. He is currently an editor of Journal of Institutional Economics and Innovation: Management, Practice and Policy and an associate editor of Review of Austrian Economics, Innovation: Management, Policy and Practice and Cultural Science. He is also on the editorial board of Cosmos & Taxis and International Perspectives on Creative Economy.