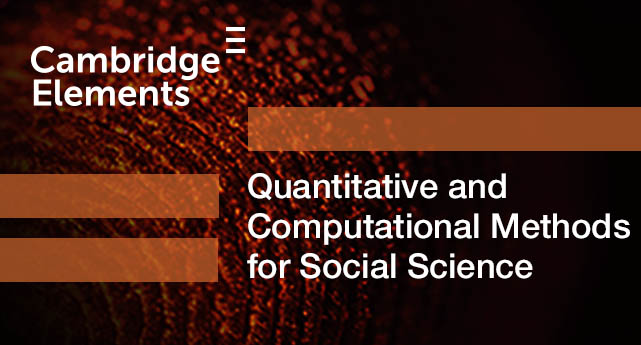 The foundation of this series will be short introductions and hands-on tutorials to innovative methodologies, those so novel they don’t have textbooks or other longer treatments as to their application.

Elements within the series are fast tracked after formal acceptance, updatable, accompanied by the latest functionality by being hosted on Cambridge’s new institutional platform (Core), as well as being available via low-priced POD.  They will appeal to researchers and graduate students wanting to stay abreast of current methodology or learn new tools, and to instructors who wish to supplement course texts.

We are also interested in causal inference contributions on new approaches for estimating causal relationships.

Other areas of focus include sampling, multimode interviewing, sample weighting, the use of new technologies for the collection of collecting survey and polling data, and new techniques for conducting and analysing data from field, online, and laboratory experiments.

About the editor - R. Michael Alvarez

R. Michael Alvarez has taught at the California Institute of Technology his entire career, focusing on elections, voting behavior, election technology, and research methodologies.  He has written or edited a number of books (recently, Computational Social Science:  Discovery and Prediction, and Evaluating Elections:  A Handbook of Methods and Standards) and numerous academic articles and reports.

He has studied elections throughout the world, including recent research in Argentina and Estonia, and has worked closely with public officials in many locations to improve their elections.   Much of his recent work has examined the use of new technologies to improve the accuracy and accessibility of the electoral process.   Alvarez is one of the few researchers in the world who has examined in detail both the problems facing many voters with special needs, and how new technologies can help mitigate those problems.  He was named to the Scientific American 50 in 2004 for his research on voting technologies.

Alvarez is a Fellow of the Society for Political Methodology, co-editor of the journal Political Analysis, and co-director of the Caltech/MIT Voting Technology Project.

About the editor - Nathaniel Beck

He is the founding editor of the quarterly, Political Analysis. He is a fellow of both the American Academy of Arts and Sciences and the Society for Political Methodology, where he was also a recipient of the Lifetime Achievement Award. He has published in all the major political science journals.

While interested in all aspects of political methodology, he has specialized in longitudinal data, including time series and time series cross sectional data. His current interests also include the application of data science, and especially machine learning, to social science.

If you would like more information about this series, or are interested in writing an Element, email qcmsselements@cambridge.org

Watch an interview with Nathaniel Beck