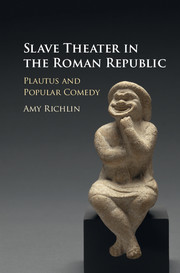 Slave Theater in the Roman Republic
Plautus and Popular Comedy