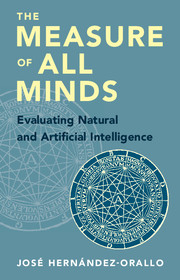 The Measure of All Minds
Evaluating Natural and Artificial Intelligence