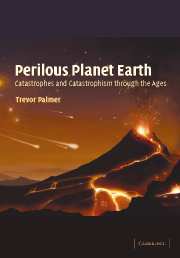 Perilous Planet Earth
Catastrophes and Catastrophism through the Ages