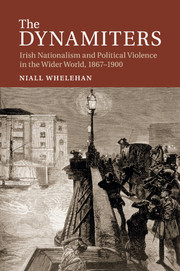 The Dynamiters
Irish Nationalism and Political Violence in the Wider World, 1867–1900