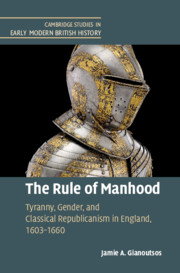 The Rule of Manhood
Tyranny, Gender, and Classical Republicanism in England, 1603–1660