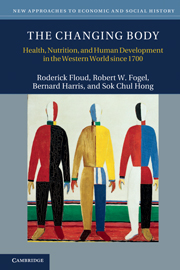 The Changing Body
Health, Nutrition, and Human Development in the Western World since 1700

Part of New Approaches to Economic and Social History