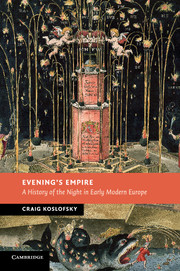 Evening's Empire
A History of the Night in Early Modern Europe