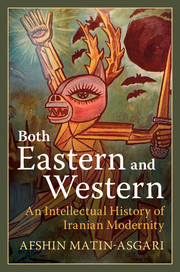 Both Eastern and Western
An Intellectual History of Iranian Modernity