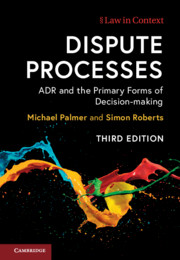 Dispute Processes
ADR and the Primary Forms of Decision-making

Part of Law in Context