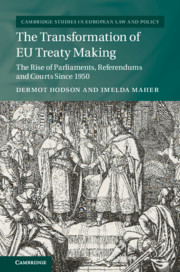 The Transformation of EU Treaty Making
The Rise of Parliaments, Referendums and Courts since 1950