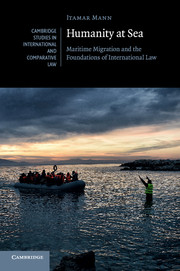 Humanity at Sea
Maritime Migration and the Foundations of International Law