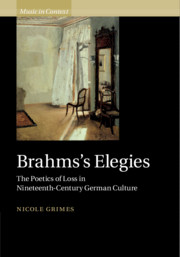 Brahms's Elegies
The Poetics of Loss in Nineteenth-Century German Culture