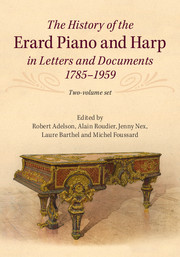 The History of the Erard Piano and Harp in Letters and Documents, 1785–1959