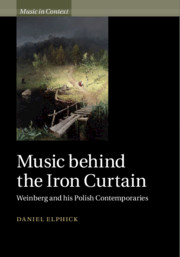 Music behind the Iron Curtain
Weinberg and his Polish Contemporaries