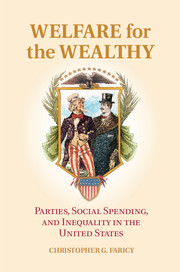 Welfare for the Wealthy
Parties, Social Spending, and Inequality in the United States