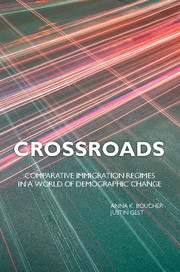 Crossroads
Comparative Immigration Regimes in a World of Demographic Change