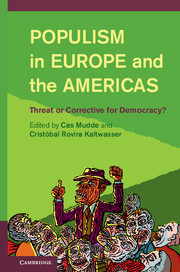 Populism in Europe and the Americas
Threat or Corrective for Democracy?