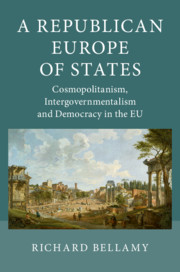 A Republican Europe of States
Cosmopolitanism, Intergovernmentalism and Democracy in the EU