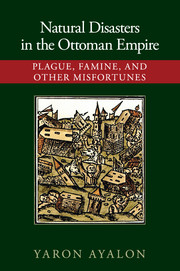 Natural Disasters in the Ottoman Empire
Plague, Famine, and Other Misfortunes