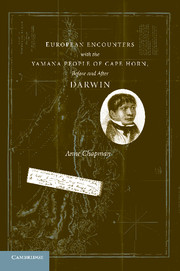 European Encounters with the Yamana People of Cape Horn, before and after Darwin