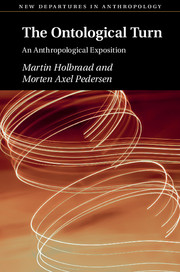 The Ontological Turn
An Anthropological Exposition