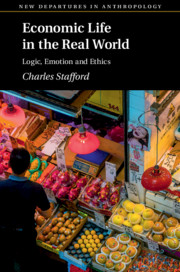 Economic Life in the Real World
Logic, Emotion and Ethics