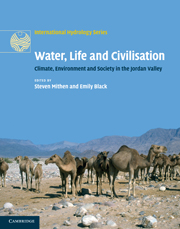 Water, Life and Civilisation
Climate, Environment and Society in the Jordan Valley