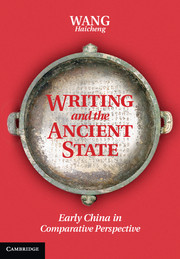 Writing and the Ancient State
Early China in Comparative Perspective