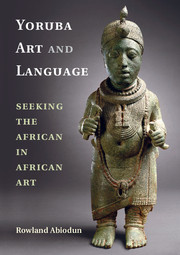 Yoruba Art and Language
Seeking the African in African Art