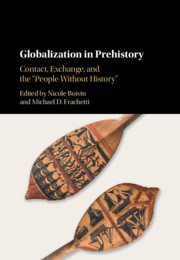 Globalization in Prehistory
Contact, Exchange, and the 'People Without History'