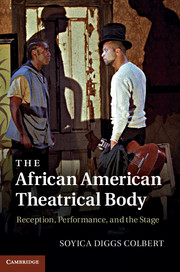 The African American Theatrical Body
Reception, Performance, and the Stage