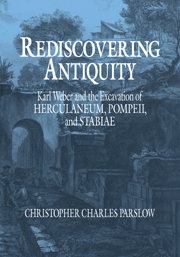 Rediscovering Antiquity
Karl Weber and the Excavation of Herculaneum, Pompeii and Stabiae