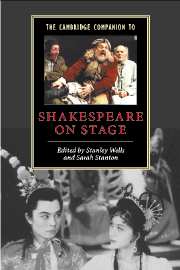 The Cambridge Companion to Shakespeare on Stage