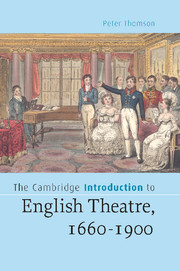 The Cambridge Introduction to English Theatre, 1660-1900