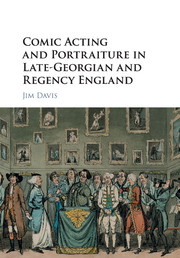 Comic Acting and Portraiture in Late-Georgian and Regency England