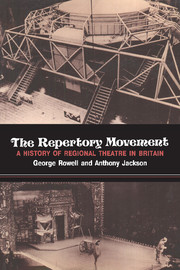 The Repertory Movement
A History of Regional Theatre in Britain