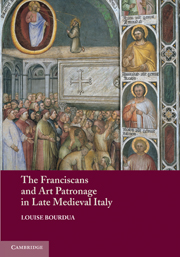 The Franciscans and Art Patronage in Late Medieval Italy