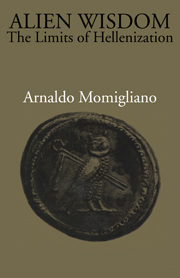 Alien Wisdom
The Limits of Hellenization