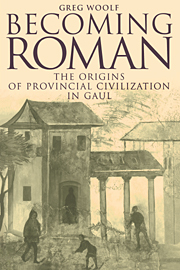 Becoming Roman
The Origins of Provincial Civilization in Gaul