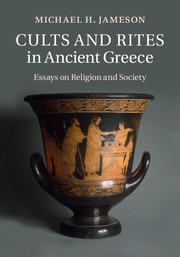 Cults and Rites in Ancient Greece
Essays on Religion and Society