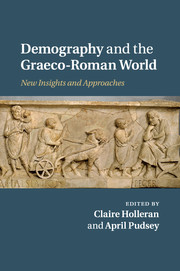 Demography and the Graeco-Roman World
New Insights and Approaches