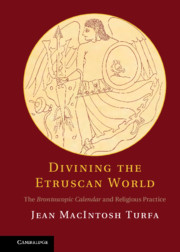 Divining the Etruscan World
The Brontoscopic Calendar and Religious Practice