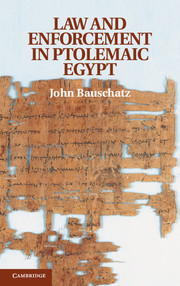 Law and Enforcement in Ptolemaic Egypt