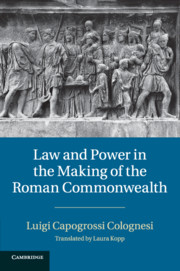 Law and Power in the Making of the Roman Commonwealth