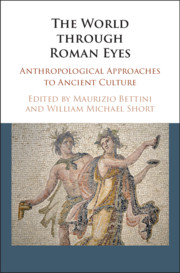 The World through Roman Eyes
Anthropological Approaches to Ancient Culture