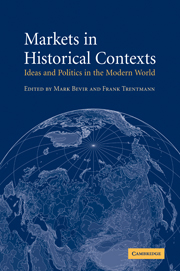 Markets in Historical Contexts
Ideas and Politics in the Modern World